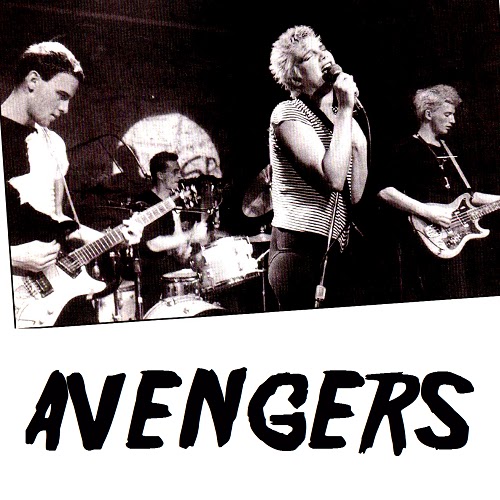 Information about the 77-79 shows copied from the original Noise Addiction blog, with the permission of the author.

Here's the Avengers recorded live at the end of 1977 on a show opening for Talking Heads. The Liars were the other opening band. This is recorded from the audience but the sound is very good.

Four live Avengers shows here from the first half of 1978. All songs here have seen the light of day on various records and CDs apart from the cover of The Who's Substitute and a mystery song called Run. At the Winterland show they opened for The Sex Pistols and is a radio broadcast. The other three shows are audience recordings and are all good quality. The date or the venue on the fourth show is incorrect as it doesn't match with the Avengers gigography. But I'll list it as I received it.

The Winterland show can be bought HERE in top quality with the complete last track.

Here's three more Avengers shows from 1978. I only have these two songs from this Mab show and have never been able to track down the complete show. The Whiskey show is a little special because it has the rare songs Night Ride and Flames Of Evil plus an Eddie Cochran cover and also an extended jam on I Want In. The song Flames of Evil is the same music as the song on the Died For Your Sins CD titled Something's Wrong but with different lyrics. The Aito's show is also special because of some rare songs. On October 23, 1978 The Avengers were in the studio recording 4 songs with former Sex Pistols guitarist Steve Jones. Out of that collaboration The Avengers added two Steve Jones songs to their set - Second To None (recorded by The Professionals as 1,2,3) and Lonely Girl (recorded by Steve Jones and Paul Cook as Lonely Boy for The Great Rock 'n' Roll Swindle soundtrack). And, there is also the mystery track Promised Land. All three shows were recorded from the audience but the sound is good on all of them.

At the end of 1978 original Avengers guitarist left and was replaced by Brad Kent from Vancouver Canada who had been a past member of D.O.A. and a couple other bands.  On all these shows they are playing new songs co-written with Brad Kent. On the Geary Temple show the play the rare song Lonely Girl plus a Velvet Underground cover. The Geary and Mab shows are both audience recordings so the quality is a little rough but still listenable. The Old Waldorf show is a radio broadcast and tracks 3 to 11 have been officially released on the The American In Me CD so you should buy it for the superior sound quality. The sound quality here is good.

This one has been ripped from a bootleg DVD by yours truly.