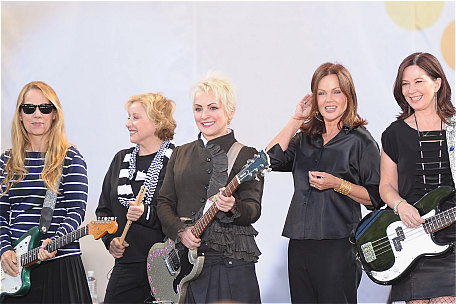 Much is going on in Go-Go Land these days.

- Belinda is moving back to LA part-time. She finally gets closer to the other girls. They're finally going to be able to practise more often.
- Belinda's brand new song Sun is to be released on May. We don't know yet if it's just gonna be a single or if a new album is on its way.
- Jane is starring in Three's Company (at Finn's Funhouse, San Francisco, CA) until March, 10th. Tickets here.
- Kathy has a few new songs of her own, she's waiting to have more before deciding what to do with them.
- Char and Kathy wrote a new song for the Go-Go's last year, Kathy sent it to Jane, Belinda and Gina to work on it. Hopefully we'll finally get some new Go-Go's material !
- Kathy has written songs for a new unamed all-female band she wants to produce very soon.
- The BlueBonnets have some shows coming in the next weeks, they have found a new drummer and are planning to release a new album in september (half of it is already done).

Email ThisBlogThis!Share to TwitterShare to FacebookShare to Pinterest
Tags News