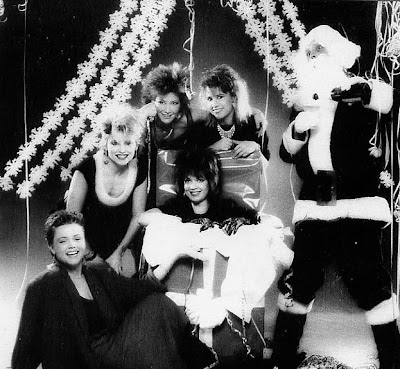 Okay, so let’s talk about LP4, the album the Go-Go’s began to work on before splitting up in 1985. We don’t know many things about it : it doesn’t even seem to be titled. I’d like to gather everything I know about it here. Paula had just joined the band in december 1984 and began to work on the song Mad About You. It seems that Paula, Charlotte and Belinda also started to write Gotta Get To You at the same time. Some other songs were registered by the girls in 1985, probably for LP4 too : Break It Up (words by Belinda, music by Charlotte) ; Love In Return (Caffey/Shock), a probably altered version of this song ended up on the 1989 House Of Shock album ; (Let’s Go Down To) Rhythm Street and Don’t It Mean A Thing, two Caffey/Valentine songs. It is unknown if Shot In The Dark, the last song by Paula from the Belinda LP, was originally written for the Go-Go's LP4 or not. After the Rock In Rio festival, the band chose Mike Chapman to produce the album. The man is especially known for his work on several Blondie albums. Char went on rehab shortly thereafter, and as soon as she got out, studio rehearsals began at SIR, in Hollywood. They were pulling together the songs, so I guess there must have been some studio recordings. During one of these sessions a big fight occurred between Belinda and Gina, which Kathy thinks to be a starting point of Belinda and Char plotting the breakup. The rest is well known, the Go-Go’s were disbanded  the 9th of May 1985 and LP4 never saw the light of day.

I have to say I’m really sorry that LP4 didn’t came out, because I’m sure that the band would have been great with Paula. Of course it wouldn’t have been the same as with Jane, but this change could have brought some fresh air to the band, even just for one album.

It seems that Gina and Paula went on working together after the breakup, since they registered a song named That Face in 1986.

Other songs mentioned here and there : No Secrets (recorded for a movie, seems the girls all hated it) and Zero To Hero.
Here's the released version of No Secrets, recorded by Van Stephenson :
If you know something I don’t, please comment and share ! ;)

And girls, please release the LP4 stuff you got one of these days. Think about Itunes.

Email ThisBlogThis!Share to TwitterShare to FacebookShare to Pinterest
Tags Discography, Focus on..., Paula