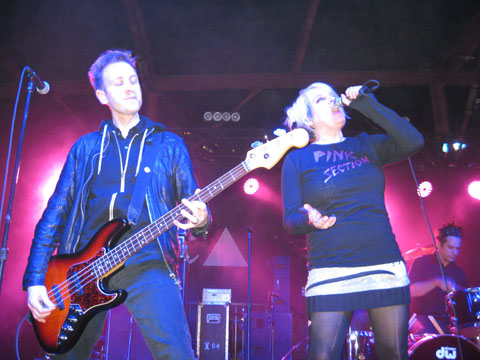 (pic from a 2012-01-28 show)
In can't believe how lucky I am with this band. I discovered the Avengers around 2 months ago (thanks to Jane Wiedlin and Alice Bag) and immediately became a fan. Just as I started looking for the Pink Album, I found out it had just been re-released two days before with lots of bonus material. Shortly afterwards, here they are doing shows in France. As I was wondering if I could attend their Paris gig the 12th of July, I found out they were performing the day after in Callac... 1h30 away from my town.

See the two red spots ? One is where I live, the other is where the Avengers show took place. The blue spot is Paris. 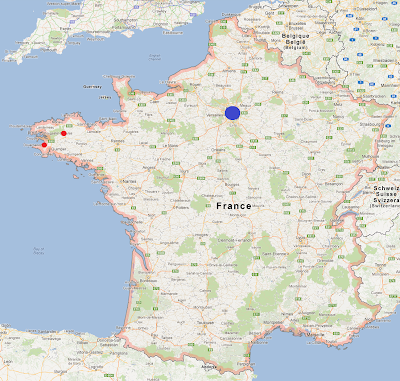 The Avengers were part of a punk festival "Vive le Punk !" in a nightclub, the Bacardi. 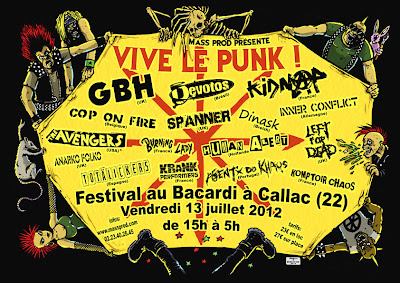 Here's the flyer of their Paris show : 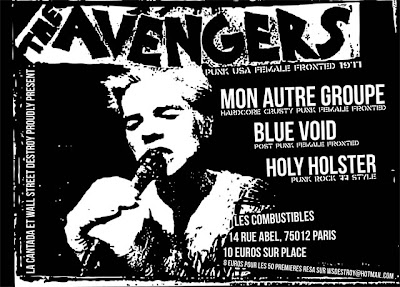 "Vive le Punk !" started at 3PM on Friday to and was set to end at 5AM. I took off with a friend around 8PM, not knowing when exactly the Avengers were going to play. We arrived there at 9:45PM, the band started playing at 9:50. How cool is that ? Here's the approximate setlist :

The venue was really small so I was very close, directly in front of the stage sometimes. The show felt like it was incredibly short. Penelope and Joel performed an "orgasm bridge" on Uh Oh, funny. Some jerk put his thumbs down at them during The End Of The World. There was no Open Your Eyes, a little disappointement. The crowd was filled with punks, this was the real deal. You had to watch out not to be hit and pushed away. The smell was a mix of beer, sweat, pee and smoke in the club. Penelope mentioned the reissue of the Pink Album. I was surprised there was no encore, they left immediately after the last song and that was it. I danced, sang and screamed as if I was going to die the day after. This was really a blast, I'm so glad I could see the Avengers at least once in my life.

After the Avengers came a UK band, not sure which one it was. The two lead performers came on stage dressed with blue garbage bags. It was more metal than punk to me, I was not into it. The crowd enjoyed the show very much though. My friend and I left afterwards. A Brazilian band, Devotos, was to play next, but they're playing tonight in my town. I might go see them.

Little sidenote : Go-Go's, you could do some Europe touring like the Avengers. They don't have to do big expensives-tickets-crowded-venues. There are plenty of fests in France you could be included in.
Publié par Chris Clash

Email ThisBlogThis!Share to TwitterShare to FacebookShare to Pinterest
Tags Punk